With being 75% of the way to my B license, ill soon be able to wear a full face helmet (like a motorbike crash helmet, with visor etc) so ive been keeping an eye out for a bargain, as these generally cost £300-400 new, or around £180-220 second hand in good condition. So, xmas money has been kept to one side, and today, while browsing facebook, a Parasport Z1 helmet, like new, im my size, got posted for sale, and i was able to reply within 90 seconds of it being posted 🙂 i managed to get it for 1/3 of the retail price, which meant that i had a little xmas money left over, then 20 minutes later, a ‘time-out’ audible alitmeter, with visual indicator was posted, for £20, which i also snapped up. this now gives me a full face helmet with visor, my normal open face helmet, 2 audible altimeters, one of which is a small computer that logs everything, my hand mounted analogue altimeter,3 different sets of goggles, 2 different types of jumpsuit (one with grips), 2 different sets of gloves and numerous different thermal options to keep most parts of me warm, and a few other random bits and bobs

all i need now, is my own rig 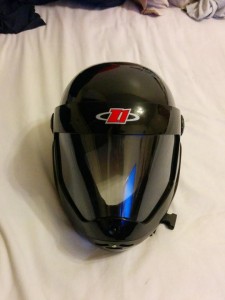 I’ve updated a few blog pages, and added a few more pages. At the top, you’ll now see Logbook, which is an electronic copy of the basic information of every jump, which will tally up with the full write up of each jump, a weather section, which at the moment only shows details for Swansea drop zone from the met office and XCWeather, and a beer fine page, which i thought will be fun to add. The jump stats on the right now links to the pages that describe what each part means, and the weather section on the main page has been fixed to grab the info from yahoo and show it on the right hand side, including sunset times, which with summer coming, normally dictates the time of the last jump.

the blog will soon be updated with graphical banners to skydive swansea, ukskydiver forum, activeskydiving-uk and possibly a few other links, to add some colour, and to advertise the places that have helped me progress in my new hobby 🙂

After the last jump, i have to get back up and do it again, manifested to be on lift number 2, and just waiting for the canopy to be packed, get all kitted up, and away we go again. The plan for this one is a downward dive exit, and practise some fast 360 turns. On the plane during take off, we go all the way down the northern runway, i think this is odd, as we are landing on the northern area, but think that its just something ive not seen before. enjoy yht views, and plan out my jump on the way up, then, at 10,000 feet, get told that me and 2 others wont be able to jump, as the landing area has switched to the southern landing area, gutted 🙁 some of us swap places in the plane now that some of us are going back down with it, then when the door opens at ~ 12,000 feet, the spotter tells the pilot that all the landing equipment is still on the northern area, the pilot tells everyone to hold on, and the plane is still climbing. i look at my altimeter, 12,300 feet, 12,500 feet, 12,700 feet, 12,900 feet, and thinking to myself ‘damn, they getting extra height as well, cant believe we have to go back down’ when suddenly, the pilot announces that over the radio hes been told everyone is good to go 😀

Goggles on, and a few seconds later, im in the door, look at alti, 13,000 feet, then i dive out, straight towards the floor, get stable, and im at just over 11,000 feet, wow, that went fast, do a backflip, then a few fast 360 turns each way, a small track, and open my canopy at 3,500 feet. while on the ground, i took note of the windsock, and its relation to the sun, but, pointing at the sun as i was expecting to be, the wind has changed, so i look at the windsock on the ground, and make my way to a holding area to the right of the runway. judging by my last descent, at about 800 feet i line myself up for my landing, and this is a pre declared landing, so i have to land within a 30m radius of the flag thats in the landing area, by about 500 feet, i know that im going to massivley overshoot the flag, so i apply the brakes a little, and my landing  spot comes closer, and by the time i land, i flare perfectly and simply step onto the ground, about 8M away from the flag 😀

this was my last jump of the day, as they then switched over to the south landing area, so i helped catching tandems for a while, as well as chatting, but, for my first day back jumping, in 2 months, i loved it 🙂

Its the first chance i get to jump since before xmas 😀 and i have a beer fine before i even get to the drop zone 😀 its early, just gone 8am, and ill be on the first lift. Its cold, but, over cristmas, i stocked up on thermal layers, so under 2 layers of thermals, normal tracksuit, thick hoody and a jumpsuit, im toasty warm. its nice to see everyone again, and a few things ive been asking about on the forums about equipment have been explained to me, then, its time to board the plane. I dont know if im scared, or excited, but i like it, i have a jump planned out in my head, and ill be the 3rd one to jump.

On the climb to jumping height i enjoy the views, the plane goes around at 7000 feet to let out a ‘ground rush’ jump, and from here i think about what im going to practise on the way down, mainly thinking about my landing and canopy ride. 11,000 feet, goggles on, and a few mins later, people are leaving, then, its my turn, and the feeling from earlier is completley gone, and without an hesitation i dive out of the door and curl up into a ball,  im flying again, this is awesome :D. i do a few backflips, and a bit of tracking, before deploying my parachute at ~ 3,500 feet.

the canopy seems to be taking a very long time to open, im watching it all unfold, its following the usual steps that i see, but it just seems to be taking for ever to get fully inflated. a little worried that i may be experiencing my first malfunction, i check my altimeter, as im aware that im not falling at full speed, and im just above 3,000 feet. I reach for the steering toggles, knowing that flaring them sorts out the ‘end cell closure’ issues, which this looks like a double whammy version, and at the same time looking where my emergency handles are, just in case. I flare the toggles, and the canopy fully inflates, i do another 2 just for good measure, and make my way to the holding area.

I plan out where i want to land, try to get a feel for the wind, and then at 1000 feet, start my descent to the landing area, and i already know im not going to get to the point i want to reach. I’ll still be on the landing area, but, ill be about 100 yards short of my intended ‘target’. I get lined up into the wind, come in to land, then flare slightly too high, so land with a slight bump, roll it off, and feel awesome about my first jump of 2014 😀