If you’ve been following my blog, especially the ‘Costs’ page, you’ll have seen that i have said that a complete rig costs thousands of pounds, even second hand, which they do. I have a few different websites, and some of them have a small advert, like the ones you see above, except, i get a fraction of a penny for each time that the advert is viewed, as i allow Google to place adverts on there (on this site i dont make any money from the adverts at all, they are adverts that i have coded into the blog myself) and over the last 6 months, all of those fractions of a penny have been slowly growing into full pennies, which have been combining, and growing into pounds, which have been very slowly grouping together and turning into £20s, and then…. well, you get the idea.

So when i saw what seemed a ‘too good to be true’ complete rig come up for sale on a ‘skydivers equipment for sale’ page on facebook, i very quickly took advise, and, unfortunately, it was gear that was so old, hence the price, that i was told not to bother, but, luckily, i took advise first before making a costly mistake. So when a partial rig popped up on the same pages, which again looked ‘too good to be true’ i quickly managed to get some good advise, only this time, it seemed that I really was onto a good deal. Facebook messages were sent, loads of facebook messages, text messages were sent, pictures were sent, then, money was sent, shortly followed by equipment being sent.

That equipment being, a Vector V3 M-series container, with the added extras, an RSL (an important extra safety feature that will automatically deploy a reserve parachute when cutting away the main parachute), built in hook knife (another safety feature, in case you need to cut a tangled line), freefly mod, ensures no loose bridle (the link between the small pilot chute and the main canopy) can be exposed, soft reserve handle pad (instead of a metal ring) and extra length (as im over 6′), as well as a reserve canopy.

The ‘new’ value of this, from the manufacturers websites, is over $3,300 (nearly £2,000 GBP Sterling at the time of posting), and at second hand UK prices, 2 seperate riggers have valued the reserve canopy on its own at around £450, so, going my roughly the same figures, that second hand is worth around 60% of the new value, that makes the container and extras worth around £700 (this may be massively wrong, im only using the same logic as the pricing for the reserve canopy) meaning that second hand, this is around £1,150 worth of equipment, that i managed to bag for the bargain sum of………

£500, including delivery 🙂 When it was all inspected, i had a few comments about what a great price i had paid, especially as it also included a reserve canopy

All I need now to make it a complete jumpable rig, is a main canopy, which im looking to put a 210 into it (a parachute with a surface area of 210 square feet) and an AAD (Automatic Activation Device, this will open my reserve parachute if i fail to do anything while skydiving), but, more about these soon 😉

As soon as i have my own full rig, my cost per jump will drop by around 35%, as kit hire and packers fees no longer need to be paid, meaning nearly twice as many jumps for only a little bit more, instead of £38 a jump, another £8 will get 2 jumps 😀 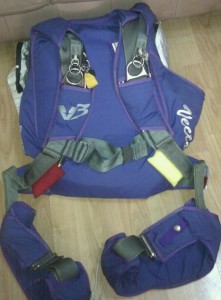 One thought on “My own rig”