Because in real life im a bit of a geeky nerd who loves gadgets and anything with blue LEDs on it, when I saw a brand new PC interface for the Pro Track altimeter i managed to get at a bargain price, i had to buy it. Also, as the corner of the screen on the Pro Track is cracked, this would also allow me to see my speeds during skydiving. So, another ukskydiver forum bargain has seen me get an £80 bit of kit, for 25% of the price. Gets home from work, to see the postie has left a package, rip it open, and its the new toy, plug it in, install the software (which also had a new license key) and start setting up my ‘logbook’. I then connect it to the Pro Track and start to import the information stored on it. While browsing through this information, I see that on my last jump, 2.2 seconds before deploying my canopy, i had actually increased my speed from 122mph, to over 165mph 😮 and the sudden increase happened at around 5,000 feet, just where my altimeter seemed to stick. I dont know if this was caused by a difference in air pressure, its something i’ll be asking about, but, impressed with the amount of information that this little tiny box captures during each jump, and, it stores it all as well 🙂 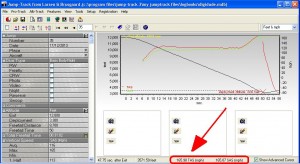